If you find yourself in a situation where a white person is talking about a marathon, you must be impressed or you will lose favor with them immediately.  Running for a certain length of time on a specific day is a very important thing to a white person and should not be demeaned.  Also worth nothing, more competitive white people prefer triathlons because Kenyans can’t afford $10,000 specialty bicycles.

In Europe, pretty girls on retro bikes with wicker baskets ride, carefree, to work everyday. Keeping active, while also keeping up the appearance of effortless chic. In New Zealand, by contrast, cycling is seen more as something for large groups of overweight, middle-aged men on expensive racing bikes – men who really shouldn’t be pouring themselves into fluorescent Lycra – to do on Saturday mornings, sweating and panting up the hills like sheep in the sun.

Last weekend I completed my third Half Ironman in Taupo… 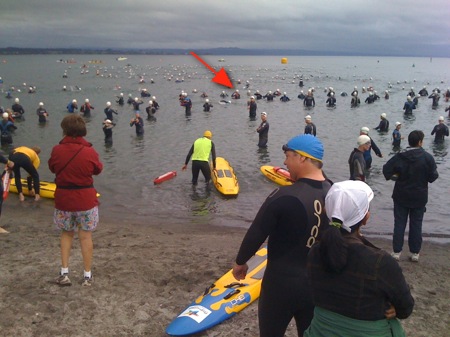 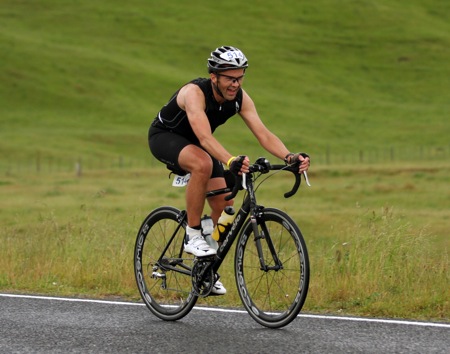 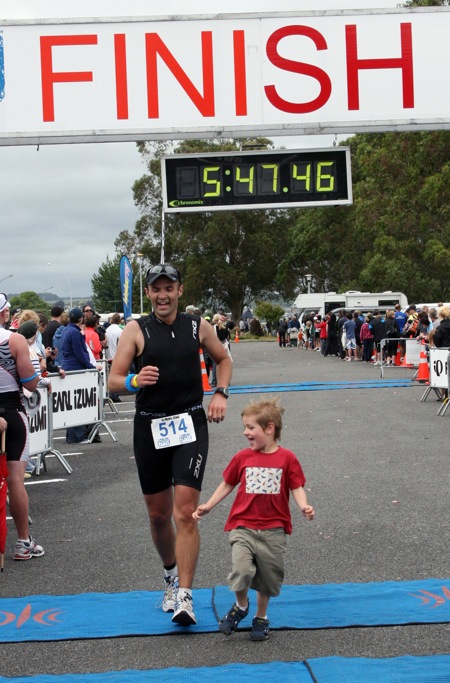 Finish (pipped at the post by a 5 year old!)

Some of you may remember a post from earlier this year, Start != Finish, where I wrote about my experience of the Tauranga Half Ironman in 2008.  Trying to avoid making those mistakes again, my goals for this race were mostly related to the shape I wanted to be in at the start line rather than the time recorded at the finish.  That seemed to work out for me both ways – I’ve lost some more weight and I’m as fit as I’ve ever been and feeling quite positive about that, and (as a result?) I smashed my personal best time for that distance by nearly 30 mins, finishing in an official time of 5:47.50.

In case that sounds fast, I should point out that this put in me in 205th place on the day, over 90 mins behind the winner.  One of the good things about triathlon as a sport, and these sort of events specifically, is that you can race yourself and win.

I know that entering long races seems like madness to most people, but really they are just an excellent excuse to be active, eat well, push myself, etc.  I’ve found committing to an imminent race date to be just enough motivation to tip the balance in my favour on all of those fronts.

However, I’d like to specifically recognise the anonymous person who unkindly commented on the size of my belly when I posted my finish line photo from Tauranga. You didn’t, and probably wouldn’t, say it to my face. Thing is, there really is nowhere to hide in those lycra race tops, as you could easily discover for yourself. But, anyway, thank you. To quote Michael Jordan’s acceptance speech when he was inducted in the Basketball Hall of Fame earlier this year: “You put another log on the fire”.

So, with this race done I’m on the lookout for another challenge.  Ideally this time it will be something that doesn’t involve swimming, cycling and running a long way, only to end up where I started.  Any suggestions?