I have a Computer Science degree, so I can code. And I’ve been fortunate in my career to work with some really great designers who have taught me many of their tricks, so I can design a little too. But I’m not world class at either of those things. I realised, when I thought about this list, that if I was going to have any role in a product team I’d need to become a good dictator.

There is no shortage of advice online about how to be a good designer or a good software developer. But what about advice for those who aspire to be good dictators? Guidance seems pretty thin on the ground.

Perhaps it’s the name? It’s fair to say that, historically, dictatorship has some significant PR challenges. Who wants to be a better one of those?

Or, maybe it’s the lack of role models. After Steve Jobs, who is the most successful product dictator you can think of? Daylight is in second place.

Whatever the reason, let’s think about what an aspiring dictator can do to improve themselves.

Start with the fundamentals: how do we choose the best thing to dictate?

This great quote from Seth Godin has the answer, in my opinion:

Change gets made by people who care, who have authority and who take responsibility

(the most important word in all three of these questions, by the way, is “you”!)

The intersection of these three things is where we’re likely to find the best opportunities to be a good dictator.

And vice versa: if we are working on something that we just don’t care about, don’t control or cannot take responsibility for then we’ll probably struggle to be a good dictator in that environment.

So, let’s look at four different aspects that are important for good dictators to work on:

If we’re going to be a good dictator our language matters. We need to be conscious of the words we choose. Think about how we describe the other people in our team. Think about how our team describes the other teams in our company.

There is one word specifically that we all need to eliminate from our vocabulary: they.

If we’re working in a technical team there is a variant of “they” that’s very common and not so obvious, but just as dangerous: “the business”, as if the business is something external and separate from what we’re working on, and usually something to be derided. This is silly. Our teams are part of the business. We’re not stuck in traffic. We are traffic.

Of course, the word dictators need to use instead is: we.

Being a good dictator means building a great team, and great teams need a wide variety of skills.

This is well understood in the sporting arena.

Consider Lydia Ko, who at just 17 years old became the youngest person to achieve a number one world ranking in golf. She won New Zealand Sportswoman of the Year in 2013, 2014 and 2015, as she dominated her sport during that time.

In early 2016 she attracted criticism for all of the recent changes she had made to her support team: a new swing coach, a new caddy (actually a number of new caddies), new sponsors and even a new brand of clubs. The problem was this seemed to coincide with a drop in her performances. Around this time she even lost the number one ranking, which she had held for 85 consecutive weeks. However, she defended the changes, saying that actually she had been constantly searching for better options in all of these areas ever since she was a rookie, and she would unapologetically continue to do that. It highlighted just how many other people, with different skillsets to contribute, were involved in supporting her success.

Former All Black coach Graham Henry, also had a simple way of explaining his success as a coach:

On first reading that seems unnecessarily humble or flippant mindset given his long list of achievements in that role. But, he’s genuine, and making a useful point: when your team is great they make you look great too. It’s important to surround yourself with winners because your success is likely to be an average of theirs.

Think about our preferred leadership style. There are alternatives: we can be a sergeant major, leading by example from the front, or a coxswain, setting the pace for others. My experience is that we can achieve a lot more if we don’t feel that we need to take all the credit, but your mileage may vary.

And then, once you’ve done the easy part of putting the team in place, you need to get on with the much more difficult job of getting them all organised (no, not organised into departments just pulling in the same direction).

Which is a nice segue to the second thing…

Apple CEO Tim Cook, said that the number one lesson that he learned from working with Steve Jobs was: focus.

A number of people shared that insight at the time. But this was my favourite response:

As opposed to all of the people who think being unfocused is the key?
— @cdixon on Twitter

He’s right, of course. We all know focus is important. So, then why is it so uncommon?

Perhaps part of the reason is that focus is hard to describe: 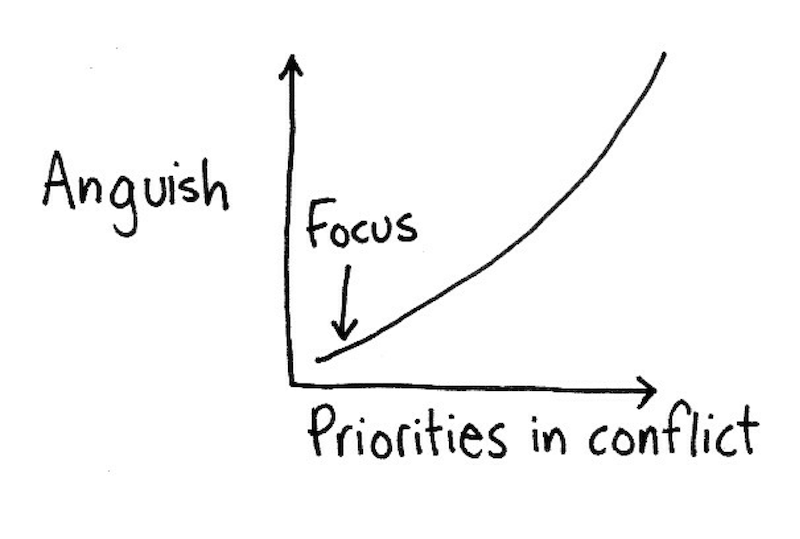 We often don’t recognise when we’re not focussed until afterwards.

For technical people a common reason for losing focus is boredom - we feel we need to be challenged by the technology we’re working on, so we keep adding unnecessary stuff to keep it interesting. Good dictators understand that what matters is not what the software does but what the user does.

For non-technical people it’s more often simple flailing. Good dictators don’t keep thrashing and splashing and hoping for the best, they work out what moves them and their team forward.

Whether we’re a designer, developer or business person, the more our satisfaction is derived from actually shipping something, and making that one thing as great as we can, the more our success will be correlated with the success of our venture. And for dictators that’s true not only of ourselves but of our whole team. We need to narrow our collective focus to those things that move us forward.

Keep in mind, we don’t have to be awesome at everything to succeed, we just need to find the right niche to focus on.

Often when we talk about successful products and product businesses we think about innovation.

But, good dictators are seldom innovators.

Here is a quick list of things that Steve Jobs didn’t invent:

Of course, he and his team moved the state of the art forward in all of those categories. And, more importantly, they were often the first to really work out what these things were for, and as a result how a wider audience could be made to desire those things. That’s what good dictators really need to do.

This is much more about execution than innovation.

Execution is one of those words we all use, often without thinking about what it actually means.

The clue is in the name: an innovative idea is like a computer program that has never been run on an actual machine. Anybody who has written any non-trivial code will know the likelihood that this will work as intended first-time is infinitesimally small.

Execution is turning plans into actions. It is tactical. It’s all about making assumptions and testing them and adjusting as you learn and as the environment you work in changes. It’s getting thousands of little things right, rather than getting one big thing right. It’s hard!

As Derek Sivers explains, a killer idea is a multiplier, but execution is where the value is.

As a good dictator our job is not just something that happens to us, it’s something that only has momentum because we start it rolling. That’s a daunting thought!

How do we measure execution? The easiest way is to look at sales.

Interestingly, most good dictators don’t seem to be primarily motivated by money. But we realise that is how a good dictator keeps score.

All of this begs an interesting question for good dictators with a technical background - because so often teams of designers and developers look down their noses at sales people (think about it: are the salespeople in our company “we” or “they”?)

Look around: if we don’t have a separate sales team then we are the sales team!

If we want to be a good dictator the most important question to keep in the front of our mind is: How will we market and sell our product or service? How will we overcome our obscurity?

Steve Jobs famously described Apple as operating “at the intersection of technology and the liberal arts”.

Here is a longer quote from Wired Magazine where he explains why this is important:

Creativity is just connecting things. When you ask creative people how they did something, they feel a little guilty because they didn’t really do it, they just saw something. It seemed obvious to them after a while. That’s because they were able to connect experiences they’ve had and synthesize new things. And the reason they were able to do that was that they’ve had more experiences or they have thought more about their experiences than other people. Unfortunately, that’s too rare a commodity. A lot of people in our industry haven’t had very diverse experiences. So they don’t have enough dots to connect, and they end up with very linear solutions without a broad perspective on the problem. The broader one’s understanding of the human experience, the better design we will have.
— The Next Insanely Great Thing, Wired, February, 1996

What else are you good at? Being a deep expert in just one area is not enough for good dictators. You need to be a polymath living at an intersection.

Think about all of the things that you care about, have authority in and are prepared to take responsibility for. Then work out what the intersection of those things are, for you and for the team you build around yourself.

Narrow your focus to those things that you can move you forward. And don’t forget that, when it all boils down, sales is how you know that you are winning.