Lie, cheat or spin, and we allow a gap to develop between perception and reality.

In a time of universal deceit, telling the truth becomes a revolutionary act.

Pretty much everything I know about lies I learned when I was around six years old.

I didn’t realise it at the time but underneath the red suit and white beard, the Father Christmas we’d go and see at James Smith in Wellington every year was an old family friend and he had me completely fooled. He seemed to know everything about me and would even recall specific details of presents that he’d given me and my brother and sisters in previous years.

Obviously, all the adults involved thought that was pretty funny. But, they weren’t the ones who, for years afterwards, just couldn’t be convinced that Santa wasn’t real. I was sure I was right and I’d lay out all of the evidence to my friends in the playground, much to everybody’s amusement. I was embarrassingly old, maybe 10 or 11, before I finally accepted the truth.

I remember being completely disillusioned. If Father Christmas wasn’t real, what other crap had I been fed? How many other imaginary friends did adults have? More importantly, how did they convince everybody else to lie about it too?

If you’re a cynical grown-up, like I’ve become, then at Christmas time you have two options: either you can pretend to believe, or you can ruin the spirit of the season for children everywhere. 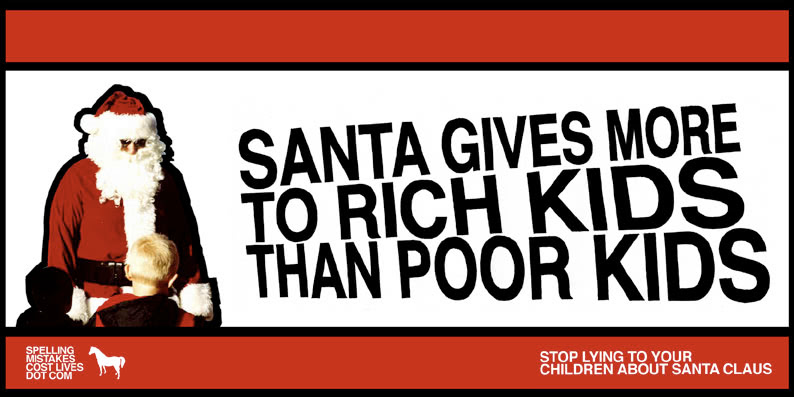 Why do we do this?

Perhaps it’s all about the bribe. After all, Father Christmas knows if you’ve been naughty and only kids who behave well get presents, right? Well, he obviously makes an exception for adults who set a bad example, because they seem to do just fine.1

Kids are so trusting and innocent we sometimes forget. When our youngest son was about three years old, we once accused him of lying to us, and in his defence, he said, “I wasn’t lying. I was sitting up.”

It’s not only by example that we teach kids to lie, in fact, we insist they do it:

We may as well skip the intermediate steps and just teach them the lame excuses we use for apologies as adults like, “I’m sorry if anybody took offence.”

Consider Manuel Neuer, for many years the goalkeeper for the German football team.

At the 2010 FIFA World Cup he was involved in a controversial incident in the game against England. Towards the end of the first half Frank Lampard scored an equalising goal for England that was disallowed by the referee. When he was interviewed about this after the game, Neuer said that he thought the way he quickly reacted and played on as if a goal hadn’t been scored had influenced the decision. In other words, he happily boasted about how well he’d cheated.

The officials responsible for making that call in realtime were slammed by fans and the media for getting the decision wrong but hardly anybody criticised Neuer himself for not telling the truth. He was the closest one to the ball, and the only one who probably honestly knew whether a goal had been scored or not, but imagine how unusual it would have been for him to simply admit the truth.

Or, go back even further in the history books to the Los Angeles Olympics in 1984, where Zola Budd and Mary Decker were involved in a famous incident in the 3000m final.

Budd was a polarising competitor even before those games, having switched nationality at the last minute from South Africa (which at that point was still banned from international competition due to apartheid sanctions) to Great Britain in order to compete at all. She also stood out from the other finalists by running in bare feet.

Decker was the local hero and one of the favourites to win a medal. So it was big news when she stumbled about halfway through the race, and fell out of contention, seemingly tripped by Budd.

Immediately afterwards Decker inflamed the controversy by saying that there was “no doubt” that Budd had intentionally tripped her. The officials initially agreed with her and disqualified Budd, who had been booed by the crowd as she completed the race. They later reversed that decision after seeing the video replay footage. Decker herself also eventually changed her story and admitted that she actually didn’t think she was tripped deliberately but that her “fall was due to her own inexperience in running in a pack”.2

To add an ironic epilogue to the story, Decker herself was subsequently one of the many ’80s era athletes caught taking performance-enhancing drugs.

So, is it cheating if we can get away with it?

Sport is actually full of little ethical dilemmas like this:

Is it smart for a batter in cricket to walk if the umpire doesn’t give them out?

Is it okay for a footballer to pretend to be fouled to try and milk a penalty?

Is it acceptable to take performance-enhancing drugs if you can claim they are for a medical condition?

Do you complain if your own team cheats or only when the opposition are cheating? 3

While it’s easy to dismiss these examples as being “just sport”, all of the athletes I’ve mentioned here were in their time held up as role models and recognised for their performance, as was this guy: Bernie Madoff. 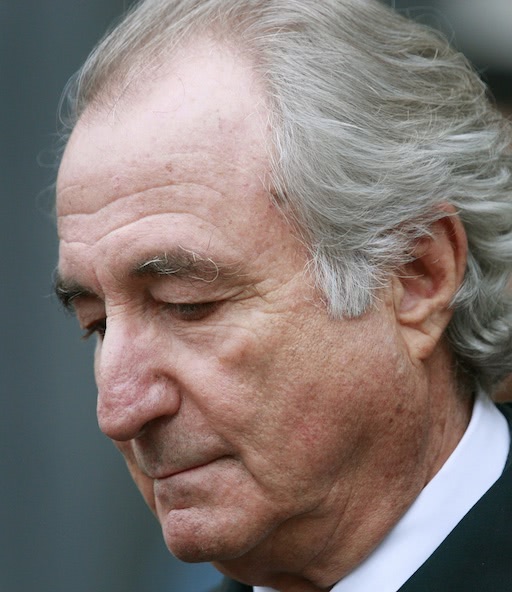 In 2009, he plead guilty to charges of running the largest Ponzi scheme in history, defrauding thousands of investors out of billions of dollars in the process, with some simple lies. Just another cheat who, for a long time, was able to fake it.

Once, on a flight, an air hostess spotted the icon on my screen and actually enforced the “turn your phone onto flight mode” rule, waiting to check that I did it.

As I sat feeling like a busted criminal, I imagined how it would be if my humble iPhone actually could magically connect and interfere with the planes navigation systems, as they claim in the safety announcement.

Do you think, if there was even a remote possibility of this, they would let us have phones onboard, and (most of the time) just trust us to do the right thing? Or would everything electronic be confiscated at security along with the nail clippers and 125mL bottles of deodorant?

And, who is “they” in that previous question anyway?

Wouldn’t it be so much better for everybody if we were honest about the reasons for this rule. We could simply say: “it’s safer for us all to have stuff like phones put away during take off and landing so that everything is clear in case of emergency”, although that would force us to address the reality that a book or newspaper is just as distracting or dangerous as a device if an evacuation is required.

Then again, this kind of misinformation is pretty harmless, right? It’s all part of the security theatre that is now an ingrained part of traveling.

Just turn off your phone and don’t make a fuss. It’s apparently better for your battery anyway.

Every new company has a story about how it got started: Apple and Google have their garages, eBay has the Pez dispenser, YouTube has the dinner party. Closer to home, even Trade Me has the cold flat and the heater.

Frequently these stories are much more spin than reality.4

There are some good reasons why this happens: it’s common for journalists to ask founders “Where did you get the original idea?”, and it’s really helpful to have an answer that is a sound bite. The real stories are often complicated, nuanced and, frankly, boring. So things get fabricated or embellished and repeated and soon enough the real story is forgotten.

In this way young companies are really just following the lead of larger corporates, who all employ teams of people to carefully manage their “public relations”.

The techniques that are now more-or-less universal were first employed by the tobacco industry in the 1950s and 60s to misdirect and reframe the negative health consequences associated with the products they were selling.5

Often the spin is pretty harmless:

We’re sorry for the delay, your call is important to us but all our operators are busy at the moment

Should be understood as

You’re calling at a very predictable peak time, but we’ve decided that the frustration you’ll feel as a result of our decision to under-staff our call centre will not be enough to convince you to change service providers.

Likewise “The CEO has decided to stand down in order to spend more time with their family” nearly always means “The CEO was about to be fired but has chosen a more dignified exit”.

But the web gets a bit more tangled when the subject matter is more life-and-death:

The combination of “died suddenly” and “police are not seeking anybody else in connection with the death” is the code the media use to describe a suicide. This is done for noble reasons, in order to try and limit copycat behaviour (or what officials call “contagion”), but also means that even in situations where it could be beneficial to tell the real story, people are left to either know the code or be a bit confused about what actually happened.

What corporations pioneered, politicians have enthusiastically embraced and perfected.6 So much so that there are now more communications staff employed by politicians than there are journalists trying to report on the press releases they produce.

Steven Colbert was correct way back in 2005: the news now is dominated by truthiness.

We all lie and cheat and spin when it suits us. We tell our own version of the story. It’s a behaviour that we reinforce in kids from a very young age, but it still makes us angry when others lie to us or beat us by cheating or don’t give us all of the facts.

And dishonesty is a muscle. It gets easier the more we do it.7

I’m not suggesting that we all become brutally honest. Most of the time when people ask “how are you?” they don’t really care to know the truth so we should probably just say whatever we think they want to hear.

We just need to be more aware when we allow a gap to develop between perception and reality. Sometimes the gap is small and doesn’t matter. Sometimes it starts small and grows bigger over time. Either way, this gap always closes eventually. It may happen quickly or it might take years. The bigger the gap and the longer you leave it open the more painful it’s going to be when it snaps shut.

So, please, tell your kids the truth about Santa before they get too old.

This is based on a short talk I gave at Ignite Wellington.

Can we update the fairytale version of how a technology startup becomes a success?