This is the second part of a three part series about the past, present and future of Windows Media Center.

It doesn’t have to be complicated.

Here is the very simple Media Center setup that Jay and Hoani from Mabode helped me put together in 2006: 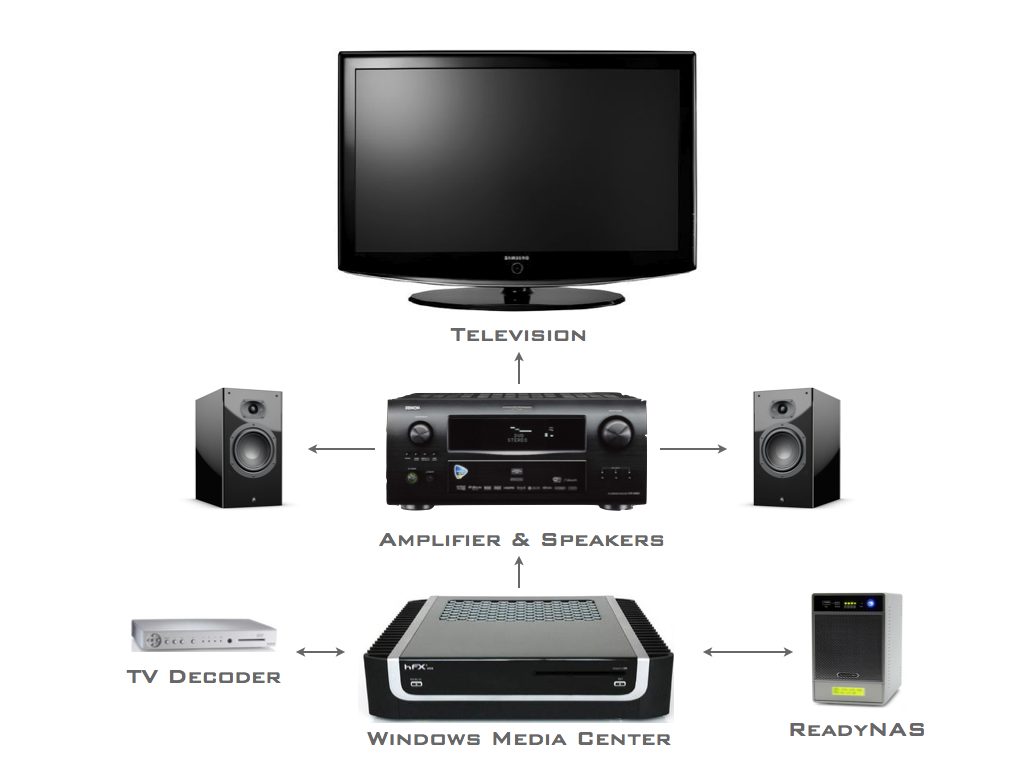 There are lots of other more complicated things that people have done with Media Center – for example, connecting in home automation systems, phone systems, security systems and various extenders to send content to other parts of the house. But, my preference has been a simple system for the living room that works reliably and quietly and doesn’t require constantly flicking back and forth between different systems to access different content.

Perhaps the most important part of our setup is a small NAS where all of our data lives – in our case as NetGear ReadyNAS, which gives us about a terabyte of RAID storage.

Getting all of our photos, videos and music in one place has provided great peace of mind – they are no longer stored on a single hard drive, and they can be much more easily backed-up.

(I’ve even been experimenting a bit with setting up an automated “trickle” backup into the cloud, but that’s a topic for another post on another day).

We haven’t yet come close to filling this space up, but if required it could easily be expanded by swapping out one or more of the hard drives. While this little box can get a bit noisy, it can be kept anywhere provided it’s connected to the network.

The Media Center itself is also connected to the home network, just like any other computer, so it can access all of the content that is stored on the NAS.

The Media Center can be trained to work with any external decoder. We’ve used both Sky and Freeview decoders without any problems. The decoder is connected to the Media Center in two directions – the TV signal out connects to the tuner card in the Media Center and there is also an infrared repeater which allows the Media Center to send a signal to the decoder, e.g. to change the channel etc. As a result we only need one remote, which can control both the Media Center itself (via a USB reciever) and indirectly Freeview/Sky.

There are now tuner cards which can decode a Freeview signal directly inside the Media Center, meaning no external decoder is required. Something like that would simplify this sort of setup even further. (I’d be interested to hear from anybody who has this working with Media Center).

But, perhaps the most important part is the case – ours is an HFX Mini, which looks more like a stereo component than a computer, and contains a big heat sink to cool the components inside rather than fans, so is very quiet.

It’s been interesting how having this sort of setup has changed changed the way we consume content, both broadcast and our own.

The ability to time shift television, and instantly skip quickly over ads, changed our viewing habits a lot. Apart from sport we rarely watch live TV anymore. And, overall we watch considerably less.

Our photos, videos and music are all much more accessible, and get seen and heard a lot more than they would locked away in albums in the cupboard or on a computer in another room.

We’ve even been able to put a couple of the kids favourite DVDs on the NAS and setup Media Center to access these, so they can play them without having to worry about swapping disks in and out.