The expression “world class” gets casually thrown around, like a frisbee at the beach. But what does it really mean?

If you call a dog’s tail a leg, how many legs does it have?
Still four, because calling a tail a leg doesn’t make it one. 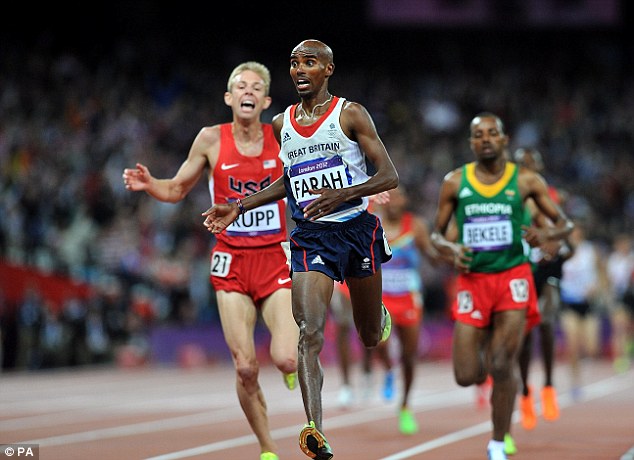 The expressions on the three medalists’ faces tell a story…

First: WTF, did that really happen?
Second: OMG, I’m a white dude winning a medal in a long-distance race at the Olympics!
Third: FML

The bronze medalist on this occasion was Kenenisa Bekele from Ethiopia. The reason he’s looking a bit glum is that he was, at the time, the world record holder, so no doubt was expecting more of himself on that evening.

Interestingly, this is an exception to the rule: according to research, the silver medalist is typically the least happy of the three medalists at the Olympics. One possible explanation for this is that silver medalists compare themselves to the gold medal winner and wonder what could have been, whereas bronze medalists compare themselves to the lower place-getters and are happy to have a medal at all.

Success is relative, remember. To be considered successful you just have to do the things that most people don’t. If your goal is to be the best, then doing the things that everybody on the planet except for just one other person doesn’t is … quite annoying apparently.

It’s nearly impossible for the average person, watching on TV, to appreciate the speed that world-class long distance runners maintain.

He ran the final kilometre of that race in 2 minutes 32 seconds. Again, probably twice as fast as the average runner could go at full speed starting fresh, and he had already run 9km at world record pace before then!

There are only a handful of people on the planet who can sustain that sort of pace. If you watch any of the elite marathons you’ll see the leading group contains some designated pacemakers for the first 20 or 30km. They are themselves very, very good athletes, running at an eye-watering pace, but they peel away eventually unable to stick with that speed over the critical final third of the race.

Here is a good challenge, for those of us who mostly sit on our behinds and urge others to be faster, higher and stronger: run just one 400m lap of an athletics track. Go as fast as you can, and time yourself. Then compare your time to Catherine Ndereba of Kenya and Zhou Chunxiu of China, who got the silver and bronze medals respectively in the women’s marathon at the 2008 Beijing Olympics, completing the last 400m of their race in about 76 seconds. Keep in mind they had run over 40km prior to starting that final lap!

It’s difficult to find words to describe the gap between these athletes and you and me.

The most obvious difference is genetic. Mo Farrah, the gold medalist above, is 1.75m (my height) but 58kg (somewhat less than my weight!) The world record holder, Bekele, is 54kg. That physiological difference is telling. In the history of athletics, only a small group of people have ever run sub-27 mins for the 10,000m, and Chris Solinsky, at 74kg, is the only one heavier than 65kg (he ran 26:59.6 in May 2010).

But, of course, it’s much more than that. There are plenty of people born with the same genetics who never go on to athletic greatness. It takes half a lifetime of hard work to get to the start line capable of running at that pace. The media loves stories about people who come from nowhere to win, but these days those sort of performances are more likely to attract suspicion rather than admiration. Most champions are well signposted, with a long history of improving performances from a very young age.

For example, Usain Bolt ran the 200m in 21.81 seconds in 2001, when he was 15, seven years before setting the then world record of 19.30 seconds at the Beijing Olympics in 2008, with small but consistent improvement every year in between.

Or consider Serena Williams, as an 11 year old training against older sister Venus:

And then 24 years later, as a 35 year old, against the same opponent, this time in the final of the Australian Open (incredibly this was the 15th time they had played each other in Grand Slam tournaments, with 11 of those matchups being finals!):

Standing on the breakwater, in front of the Golden Gate Yacht Club in San Francisco, on the morning of 7th September 2013 waiting for race one of the Americas Cup to start, my heart rate was noticeably higher than it normally is. It’s hard to comprehend how the team themselves must have felt, given what they had personally invested in preparing for that event. Up close, the fragility and bespoke-ness of the boats they were racing was much more obvious than it was on television. They are designed and constructed to sail right on the limits.

Somehow those on board continue to operate and hold it all together despite those nerves. The very best actually seem to thrive on the pressure.

And, it wasn’t just physical.

There was an amazing moment in the press conference after day four of racing. Emirates Team NZ were dominating the event at that stage, winning both races that day, and leading 6 to 1 overall in the first to 9 series (actually 6 to -1, as Oracle Team USA didn’t get to count their first two wins due to a penalty). Oracle’s skipper Jimmy Spithill was asked how he was dealing with the pressure, and replied:

I think the question is: imagine if these guys lost from here. What an upset that would be. They’ve almost got it in the bag. So, that’s my motivation. That would be one hell of a story, one hell of a comeback. And that’s the kind of thing that I’d like to be a part of. I’ve been involved in some big fight backs, with some big challenges, facing a lot of adversity. That would be the kind of thing I’d love to be involved in.

Huge fighting words, and with the benefit of hindsight, quite prophetic, as Oracle eventually went on to complete what many have called the greatest comeback in sport to retain the cup 9-8.

It was a remarkable level of self-confidence bordering on cockiness. And it was a deliberate strategy. I’d love to know how much he actually believed himself, deep down, that day.

Imagine yourself in Dean Barker’s position, and wonder how you would respond to that sort of comment - not just immediately, but lying in bed trying to get to sleep that night and then looking across the water on the start-line the next day with him grinning back at you.

Bonus: Dean Barker, interviewed on Radio NZ about his experience in San Francisco.

If you get a chance to go to a professional rugby game, be sure to get there early and watch the teams warming up. Take some binoculars and just follow one player. If you’re anything like me, you’ll find it mesmerising to watch them run through a very methodical set of exercises as they prepare for the game ahead.

There are hundreds of thousands of kids in New Zealand who grow up dreaming of being an All Black or Black Fern. There are thousands who play at 1st XV level, and every year there are a couple of hundred who play professionally and are eligible for selection at the highest level. The breadth of that pyramid, and the competition for places and desire that creates to be part of the team probably goes a long way to explaining why the level of performance is so impressive at the very top.

It’s tempting to imagine that those who are picked have something magical that sets them apart from mere mortals. But, actually, it’s not magic.

Prior to the Rugby World Cup in 2011, I had the privilege of working with some of the All Blacks players and coaches as we built The Rugby Site. It was fascinating to hear them describe their roles on and off the field in their own words, and understand the thinking and preparation that goes into the performances we all get to watch and enjoy (and heavily criticise when things, occasionally, don’t fall their way):

They have the same skills that any weekend warrior has - passing, catching, tackling, kicking - but these elite players are able to perform those skills repeatedly under extreme pressure:

They are the rugby equivalent of the great Dutch football team of the 1970s, seemingly full of genius ploys when really, their whole game is about supreme execution of the basics.1

It’s very easy to talk about executing the basics. But, actually, just doing that consistently and despite all that is happening around you is enough to set you apart from nearly everybody else in the world.

Don't wish it were easier, wish you were better.

In sport there is an obvious and massive gap between the elite few and everybody else. For the enthusiastic amateur it’s tempting to bridge that gap in our mind and imagine that we could be a contender, but that doesn’t often stand up to much scrutiny. Very few amateurs call themselves world class.

However, in business this distinction is often lost. And especially in startup businesses.

The expression “world class” gets casually thrown around, like a frisbee at the beach on a sunny afternoon. But most people who use it actually have no concept of what it means.

It seems so easy to start a company and dream big. Anybody can do it, right?

I have a great idea for an app, if only I could find a developer to build it for me.

Or even more delusionally,

I just need to get it out there and it will sell itself!

We need to ask at the outset: can we be world class and is that even the goal?

Do we have the desire to put in the years of hard slog and dedicated focus, to be able to push ourselves to match the performance of the very best out there (keeping in mind that every founder thinks they can do in two years what always takes at least five, often seven, sometime even longer)?

Can we look our competitors in the eye and confidently know that we are mentally stronger and able to execute better when it counts? And, even if we don’t believe that, are we able to talk it up anyway, so at least they believe we do?

Are the basics so ingrained, due to consistent and repeated execution over time, that we’re able to repeat them almost mindlessly, even when time and other constraints are working against us?

We achieve that by competing with, and beating, the best in the world.

How would treating time as a variable that we can influence change the way we behave and the choices we make?

Imagine objectively selecting companies to receive government support, without the bureaucrats or consultants?

Let it go. It’s what you learn, after you know it all, that counts.