There is no depression in NZ (yet)

The US stock markets just recorded their worst month since 1933.  The amount of money that has been wiped off the value of listed companies around the world is staggering.

As this chart from Financial Graph & Art shows, this is now the second worst bear market when measured by the percentage decline in values, but we still have some way to go to match both the length and severity of the market drop between 1929 and 1932. 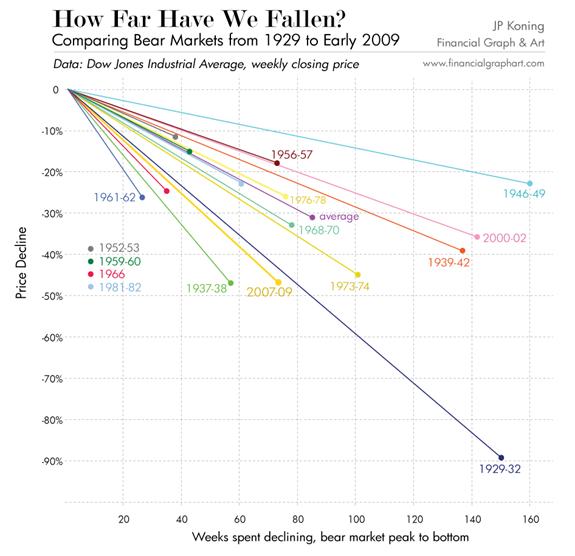 This is clearly somewhat uncharted waters.  And, it’s interesting to see what different countries around the world are doing to try and address this situation.

Having spent a few weeks in the US recently, it feels like we’re much less optimistic here in NZ.  Obviously the recession/depression is dominating the news over there too, but the mood is still “yes we can!” rather than “gulp, we’re stuffed!”.

For example this (from the New York Times)

Wrapped inside the economic stimulus package is about $80 billion in spending, loan guarantees and tax incentives aimed at promoting energy efficiency, renewable energy sources, higher-mileage cars and coal that is truly clean. As a stand-alone measure, these investments would amount to the biggest energy bill in history.

Not sure about the “truly clean coal” part, but that does seem positive.

And, it makes the 9-day-fortnight proposal seem pretty modest.

On the other hand, I’m not necessarily sure much of the optimism is warranted.

What are they going to do about their auto industry?  More bail outs?  Or let them fail?  Neither seem like especially attractive options.

While I was there Hyundai were running a series of positive TV ads highlighting their assembly plants based in Alabama, employing lots of Americans, etc, etc (and without saying as much noting that this was all without government bail outs).  As Fred Wilson pointed out: “the auto sector has the potential to be the ‘Vietnam’ of his energy plan” and “when a portfolio company acts like [GM] in our business, they are dead on arrival”.

Whether you’re optimistic or pessimistic, it’s difficult to disagree that this is a horrible mess.

Do you feel like there is anything you can do, or is this something that they have to solve?  And, if so, who is “they“?

Think about the things you have already personally done: do you think they have made things better or worse?  For example, if you have stopped spending so much on stuff you can do without, what’s the impact on the companies that used to make and sell that stuff, and the people who work for those businesses?

Amongst this carnage, where are the opportunities?  Remember: Trade Me was launched in 1999, just as the first tech bubble burst spectacularly.

And, is anybody else worried that we’ve all started to feel that things are inevitably going to get worse?

If you want to understand how this whole mess has come about, here is an excellent animated overview: