A while ago I ran this blog through a tool called Typealizer (which now unfortunately seems to be permanently offline).

This took the content of the posts I’ve written and from that tried to deduce my personality type.

It also created a picture representing the parts of the brain that were apparently dominant when I wrote: 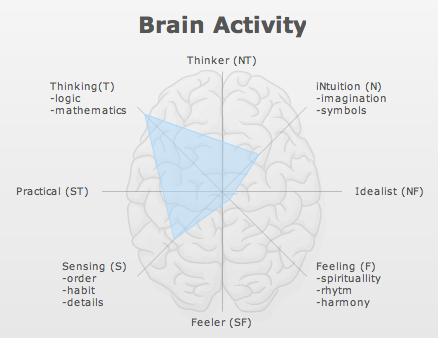 That I would even take the time to run this experiment probably tells you all you need to know to put me in a specific personality profile box. But despite that I was still a bit surprised to find that I was so unbalanced!

With no disrespect intended to either Ms Myers or Ms Briggs, I think you can simplify this sort of thing even further…

I think that there are basically two types of people in the world:

Fact-based people are all about what they can rationalise and understand and measure and prove.

Faith-based people are all about feeling and believing and doing what intuitively seems right to them.

Our knowledge only increases when somebody is wrong.
— Karl Popper

Fact-based people need the confirmation of feedback loops to give them confidence that they are making the right choices, or at least making choices that don’t suck as much as the other options they considered. The problem is that this fundamental insecurity can easily tip over into paralysis (“what if there is a better option?!”) You still need something to prompt you and compel you to act, otherwise you’ll never have a hypothesis to test.

Faith-based people need nothing of the sort. Instead, they rely on instincts and hopes. It’s important to differentiate between these two things. It seems reasonable to trust your own instincts. If you don’t, it’s unlikely that anybody else will. But, that trust shouldn’t extend to blind faith. Hope, on the other hand, is not a method. Hope is generally just wishful thinking.

Because there are weaknesses with either approach, there is obviously a place for both.

But problems do seem to occur when two opposing approaches overlap.

Possibly the worst combination are those faith-based people who believe they are fact-based but whose actions don’t back that up. They think their opinions are correct, but they also don’t think they have to prove it.

As I’ve been frustrated to discover on more than one occasion, it’s ultimately futile for a fact-based person to try to argue rationally with a faith-based person. To do so is to misunderstand the basis they have for making a decision. Heresy in the wrong company is no joke!

Likewise, it is (I imagine) infuriating for a faith-based person to try and work with a fact-based person constantly questioning their judgement and wanting them to back up well formed opinions with a bit of observation.

For the sake of our collective mental health it would seem that that like minds need to stick together. But, we’d probably all be worse off if we did.

Wearing a watch doesn’t make you a punctual person. But it gives you the information you need to be one, if that’s your wish.
— Hackers Diet

Can you choose? I think so.

For a fact-based person to become more faith-based would be pretty easy. You’d just need to trust your instinct more, stop questioning yourself and stop trying to justify your actions to others.

Going in the other direction would be harder. But, I think you probably could do it if you were determined, by forcing yourself to make decisions based on facts, rather than gut feel. Over time that would become a habit. I wonder how long it would take?

How little do we know that which we are.
— Lord Byron

I think the important thing in all of this is to take the time to understand yourself, and those that you are trying to work with.

If you can do that you’ll increase your influence and save yourself a lot of frustration.

If you don’t know, and are tempted to take a test to find out, then you are probably mostly fact-based.

Righto, that’s enough amateur pop psychology from me for today …

What do you think?