Investing in early-stage companies is very risky, due to the massive disparity of possible outcomes.

There is a good chance we will lose all of the money we invest in any given venture, and a very small chance that the company will go on to become very valuable and in the process make us look like a genius for choosing to back it in the beginning.

It’s nearly impossible to tell for sure in advance which opportunities are the likely winners.

In response to this uncertainty many would-be investors make the mistake of believing that they can reduce their exposure to this risk via diversification. That is, spread the money they invest across a portfolio of startup companies, hoping that one of them will be a winner and offset the losses from the others. Or, more colloquially: “don’t put all of your eggs in one basket”.

The general theory is sound, and probably makes a lot of sense when investing in larger public companies.

But, importantly, the lower end of that “range of possible outcomes” when we are talking about private early-stage companies is still “we lose all of the money we invested”.

What does diversification cost?

Remember, the odds of picking a winner in either case are very low, but the reward if we do can be spectacular - for the sake of this example let’s assume that each $1 invested could, just a few years later, be worth $3,000 or more (this is, very roughly, the return on the original $100,000 that was invested in Trade Me in 1999 when the company was sold to Fairfax in 2006).

What happens in our two scenarios in the best case (i.e. we pick a winner)?

If we diversified, we lose our money on nine of the ventures, but the $1,000 invested in the winner becomes $3 million. That’s not a bad result by any measure.

However, if we didn’t diversify and instead invested the full $10,000, the return becomes $30 million!

What happens in the worst case (i.e. if we don’t pick a winner - remember, this is by far the most likely outcome)?

This is easy. In both cases we lose all our money.

Of course, those are only the two extremes. What about the possible outcomes in between? It’s tempting to think these would be more common, by assuming that the possible returns from an early-stage investment are a normal distribution with the median being positive. But, that’s sadly not the reality. 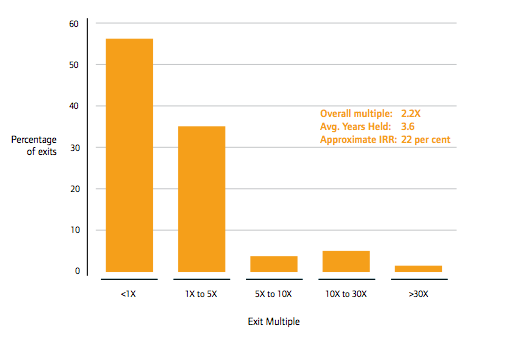 Source: Siding with the Angels, by Robert E Wiltbank (pg 14)

If we assume no selection bias and a large enough portfolio, then the overall expected return is a little over $2 for every $1 invested.

But, in practice, the outcome for any individual investor is much more binary than most who take this approach realise.

Each investment we make is a discrete event - a separate spin of the roulette wheel. We can bet on the same number all night, and it doesn’t matter how many times we spin the wheel it doesn’t make it any more or less likely that we will hit the jackpot.

How do you choose?

The common mythology says that one in ten startup investments is a big winner. So, all we have to do is randomly pick ten companies and then sit back and wait for one of them to win, right?

There are two big assumptions in the logic above that we just brushed over, that don’t stand up to much scrutiny when we look at the individual portfolio of any given early-stage investor.

The first, and more difficult, is the “no selection bias” assumption.

This is all about our judgement in picking great companies before they are obviously great.

Are all of the companies we’re choosing to invest in potential big winners? Or, do we have a blind spot, which means that each investment is possibly flawed in the same way?

One common but often overlooked source of selection bias is our source of investments - what some investors call “deal flow”.

When we’re screening public companies, we can buy shares in any company we choose to invest in, if we’re so inclined. But, with private early-stage companies it’s not so simple. The best companies (i.e. those most likely to be big winners) are generally able to pick their investors. If we’re waiting for companies to pitch to us, or insist on harsh investor-friendly terms, or want to invest passively from the sidelines rather than taking an active role in helping, then we probably have a selection bias - i.e. we only invest in more desperate companies.

This is one of the reasons why I advocate a founder-centric approach.

Those who take a portfolio approach often invest via syndicates. In that scenario it is very common, in my observation, for everybody in the syndicate to assume that somebody else has done the work to validate the potential of the investment, meaning actually nobody has.

It only takes a small amount of poor judgement to introduce a potentially fatal selection bias to an entire portfolio.

The second assumption, and the one more easily dismissed, is the “large enough portfolio” assumption.

Perhaps if we could build up a portfolio of hundreds or thousands of early-stage companies then our returns might be what the theory suggests it should be on average.

But, that’s not practical for most early-stage funds, let alone individual investors. We continue to stubbonly believe, despite lots of evidence to the contrary, that there is a shortage of capital in New Zealand, when the reality is there are simply not that many high-quality investment-ready companies.

And, in either case, as we saw above, the larger the portfolio the lower the return if we do happen to pick a winner. Those building really big portfolios are backing themselves to pick multiple big winners, or one exceptionally big winner (aka “a moon shot”). We need to be fishing in a very large pool for this to be feasible.

The last thing to consider is much more subjective.

For most ventures, removing a capital constraint only uncovers an execution constraint. The best early-stage investors understand that the money they invest is important as a ticket to the game, but the advice they give and the work they do to help the founders progress the business is much more impactful.

So the question then is not only how much money we’re willing to invest in early-stage companies, but also how much time. For most early-stage investors that quickly becomes the limiting factor.

Taking a portfolio approach means that both time and money are spread more thinly and much less likely to contribute to the success of the ventures. As Steve Jobs famously said, “focus means saying ’no’".

So, this is my advice to those thinking about investing in early-stage companies, for what it is worth: put all of your eggs in one carefully selected basket and then work hard to make that basket a good choice.

You may or may not pick a winner - remember these are startups we’re talking about so the odds of success are massively stacked against you either way. But if you’re going to take that sort of risk, you may as well set yourself up to enjoy the full up-side if you do get lucky.

Credit to Peter Lynch for originally coining the term ‘Diworsification’. He used it to describe the situation where risk is already very low, so adding additional assets to a portfolio doesn’t help. I’m arguing that the same logic applies when risk is already very high.

Show Me the Money

Trying to decide how to fund a startup? It’s important that we ask the right questions.