The next big thing is most likely to emerge from a few smart young guys with laptops working together in a skanky flat (if you don’t believe this, just look at where so many of the current big things came from!)

By that measure Go Vocab is a prime candidate for success – they tick all of the boxes: smart, young (at least relative to aged old gentlemen of technology like myself) and holed up in a nondescript central Wellington apartment working hard on creating a successful business.

Michael Dowse is one of the co-founders, and somebody that we’re excited to be investing in and working with. 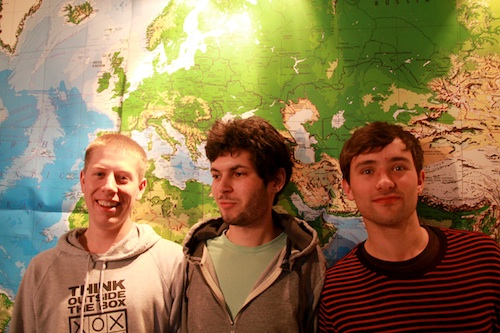 About 45 years ago Joan Ganz Cooney and Lloyd Morrisett asked the question “can television teach kids their ABCs in the same way it was introducing advertising jingles for cereal?” and Sesame Street was born.

Now a similar transformation is underway as education startups everywhere are working to translate the success of social games into educational tools.

Sesame Street’s goal was to “master the addictive qualities of television and do something good with them”, and replacing TV with the Internet, our ambition is the same.

For students Go Vocab is a fun way to master the traditionally boring parts of learning a language such as vocabulary and verb conjugations. Students are also given some control over the direction of their learning and can progress through the content at their own pace.

For teachers Go Vocab is a tool to teach languages and supervise their students progress. By giving teachers complete control over what they teach Go Vocab is able to match individual teachers teaching styles.

Our users are mostly high school students learning another language at school (e.g. French, Japanese, Maori). We sell annual subscriptions to the service for $30 per student. It’s free for teachers. We sell both to teachers and schools and also to students individually.

We’re working to create exposure for ourselves within the school language learning community. We achieve this by attending and participating in teacher training events, through word of mouth promotion, and by being active members of the NZ language learning scene. We also have been featured in news media and are building our presence in the social media.

We have over 7000 students and 400 teachers using Go Vocab across 100 Schools, split between paid and trial accounts. So far almost all our customers are in Australia and New Zealand. In 2012 we will be tackling Asia and the Northern Hemisphere.

The concept came from vocabulary revision iPad app I pitched for an Apple Student Developer scholarship. I didn’t win, but the experience inspired me to expand the vocabulary learning tool to a website that would assist teachers and students in and out of the classroom.

After spending the end of 2010 working on the site in my spare time, I quit my job as a developer to work full-time on Go Vocab. My co-founder Jeremy also quit his job and came on board at the same time.

Initially we saved up so that when we quit our jobs we had enough savings to last 6 months. We also worked on the product and signing up customers so that by the time we started working on it full-tme we had a working product and some local schools had agreed to trial it. A few months later once the trial period finished for the first schools to sign up we started bringing in revenue.

In May this year we decided to try raising a seed round and made a short list of potential investors who we thought would be a good fit and we had connections to. Southgate Labs were on the list because I had previously worked with Michael Koziarski. It took about a month to complete the fund raising process.

Our pitch was fairly compelling as we were both technical, had a solid product, and most importantly we had paying customers. We were also young, with limited business experience, no ‘deck’ and no business plan. Fortunately this matches the pattern of many successful startups!

There are currently three of us working full time on Go Vocab, along with some contractors when needed. Jeremy and I are co-founders, and in August we hired our first employee, Tim, to work on Sales, Marketing and Customer Support.

We’ve made a lot of mistakes along the way. A lot of what we’re doing is very new to us and it’s probably unrealistic to expect that we’ll get everything right first time.

As you would expect with two technical founders we’ve always been very product focused. We signed up a few schools early on, but then got distracted by how they were using the application and stopped selling for a few months. Also, where teachers did sign up we weren’t quick enough to follow-up with them.

The biggest challenge is knowing how to balance your priorities. An obvious example is developing the product from your vision while integrating what your users ask for. Often these go hand and hand, but like it or not you’re eventually going to run into a situation where what you want for the product clashes with what people are asking for.

While we’re focused on languages at the moment, we see ourselves as an education company and there’s lots of potential for future expansion.

My advice to founders is of course to follow your passion but also be aware that passion can bias your decisions. Building a company involves a huge variety of work and you have to make sure you’re always doing the most important task. In my case I care a lot about the product, so I have to fight the urge to spend time working on the product when there are other tasks to do that would be more efficient in moving the company forward.

If you want investment then traction is all that really matters, and once you have it follow Evan Reas’ two stage process: