Today is the start a new series of guest posts by founders talking about their ventures.

First up is a guest post by Dr. Sam Hazledine, the founder and managing director of locum doctor agency MedRecruit, which is Australasia’s premiere agency for doctors creating a lifestyle and career in medicine. 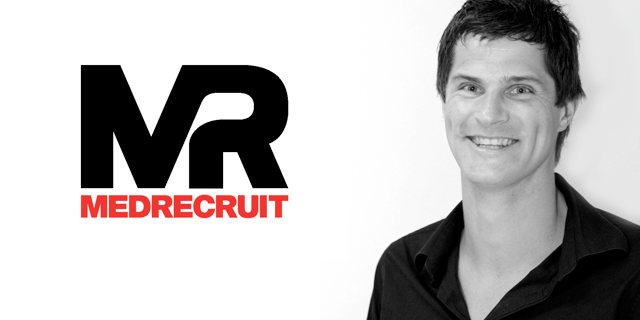 At MedRecruit our vision is to GO FURTHER – we go further for our clients so they can go further in their lives.

Our purpose is to fulfill dreams for doctors and to create certainty and confidence for hospitals. We do this by finding placements for doctors throughout Australasia that meet and exceed their lifestyle, career and financial goals.

The business model is simple. The medical recruitment market is a supply constrained market in that there is a massive shortage of doctors. So, our business model focuses on adding massive value to the doctors by not only getting them the right placement but also taking care of many other things they need like continuing medical education, accounting and relocation assistance. We do all this and we don’t charge a fee to the doctors. Doctors choose to work through MedRecruit because they get so much more than through any other agency, and this means our pool of doctors is of value to the hospitals. The hospitals need doctors so the hospitals pay our fees because we have loyal doctors.

I started MedRecruit in 2006 because I saw the need for a truly ‘doctor centric’ agency that wasn’t just focused on making commission, but was really focused on improving the lives of doctors. Initially I had two IT partners, Chris Auld and Simon Gardiner, who focused on building the IT platform to run the company. This was good at the start when we were bootstrapping the operation, and I now have full ownership of MedRecruit because those IT needs have changed.

A key part of the success of MedRecruit is the people who are involved. We have a strong culture that attracts people to it and empowers people in both their personal and professional lives. I have pulled together a very talented management team who handle each part of the business, and the frontline staff are phenomenal. A strong team is key to our success because while we are in medical recruitment we see ourselves as a service business that just happens to be in that industry.

We’ve grown very fast. In 2008 we were named the fastest growing Business Services Business in the Deloitte Fast 50, and the second fastest growing business overall in New Zealand. We have remained on the Fast 50 for the past three years. Incidentally, the only other business to enter this high and to stay in the Fast 50 this long was Trade Me. I’m expecting Fairfax to make an offer to me soon… I have no investors in MedRecruit so with our rapid growth it’s been important to maintain a great relationship with ANZ. An understanding bank manager is pretty important when you’re calling them asking for an extra $250,000 on the overdraft tomorrow to pay the doctors (which happened more than I liked in the past few years).

Because I didn’t bring on any investors I had to work at the same time as I started the company. My girlfriend (now wife) Claire quite her job in PR to help get MedRecruit off the ground. I worked four shifts per week in Hutt Hospital ED and spent almost every other waking hour working on MedRecruit. I averaged between 90 and 100 hours work per week.

The key was that I was totally clear on my vision for my life and for my company. And not only was I clear on my vision, but I was also 100% clear on why it was non-negotiable for me to achieve it. Because of this the massive hours weren’t ever an issue. I believe that it’s your reason ‘why’ that’s the most important thing to your success. When you have a strong enough ‘why’ the ‘how’ will always reveal itself. Most people have goals but if they don’t know why the goal is really important to them it’s pretty easy to find excuses as to why you can’t achieve them.

I’ve spent a lot of time and money investing in not only the business, but also in educating myself and creating a bulletproof psychology. As an entrepreneur you can expect to fail. But I don’t believe whether you fail or not is important. What is important is what you do with that failure; do you quit or do you get up again ready to do battle? And it’s not even whether you get up or not, it’s whether you’re prepared to get up as often as it takes until you get there. Success might be around the next bend in the road and there’s no way of knowing if it’s the next bend or a hundred more bends. If you quit you’ll never know how close you were.

It comes down to making your goals non-negotiable and being totally accountable for your own life and success.

My ambition for MedRecruit is to improve the lives of all doctors in Australasia; to do that we need to become the number one medical recruitment agency in Australasia. I’m also looking at other geographies like North America, Europe, Asia and the Middle East, to see what markets we could add value in. I’d like MedRecruit to be a global company because I think then we can have the biggest impact not only in those markets but also for our clients here in New Zealand.

My advice to anyone looking to start a company, anyone who has just started a company, or anyone who has a company that’s not doing as well as you want is to firstly get clear about what you want to create, get clear about why you want to create it, then take relentless action until you get there. Surround yourself with the best team you can, find people better than you are, and help them to achieve what they want in life and they’ll help you achieve what you want.

Pig Headed Determination is what’s required so take action and persist until you succeed.

« Being Founder-Centric
Dave ten Have, Ponoko »